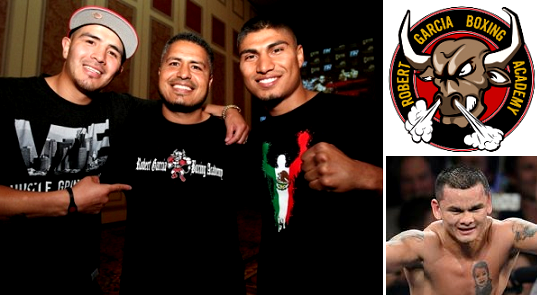 Las Vegas (JULY 24th, 2014) – The Robert Garcia Boxing academy, with 2013 trainer of the year Robert Garcia along with WBO super featherweight champion Mikey Garcia, and fan favorite former WBA lightweight champion Brandon Rios have confirmed that they will appear and have a booth to Meet and Greet their fans at the inaugural Box Fan Expo this September at the Las Vegas Convention Center during the Mayweather vs Maidana rematch fight weekend.

Located in Oxnard, California, the Robert Garcia Boxing academy is widely considered as one of boxing’s most successful gym in the world, with current top fighters such as Mikey Garcia, Brandon Rios, Nonito Donaire and Marcos Maidana. The gym is open from 10am to 4pm for the Pros and 4pm to 9pm for the amateur program. Over 150 kids participate at the gym every day in a after school program.

Quote from Robert Garcia:
“It’s great for me to get my fighters out there to meet the fans and sell merchandise to be known to the boxing world. It’s also great for me to participate with others that are going to be there.

Quote from Mikey Garcia:
“I’m glad to be part of this experience. It’s a great way for all the fans to see fighters up close and on a personal level. Fans get to Meet and Greet, buy merchandise and memorabilia as well. Overall being there is a chance to see all fighters, all at once in the Boxing capital of the world (Las Vegas).”

Quote from Brandon Rios:
“I think it’s cool to see all the fans at the Box Fan Expo and have all the fighters there. It’s pretty cool for fans to get to meet their favorite boxers.”

Every year, one of the biggest boxing weekends of the year is Mexican Independence Day. In 2014, that weekend has just got bigger, better and more fan accessible with the announcement of the FIRST-EVER BOX FAN EXPO.Box Fan Expo will take place on Saturday, September 13th, 2014 at the Las Vegas Convention Center and will run from 10am to 6pm.

The event will also feature major promoters, ring card girls, sanctioning organizations as well as trainers, referees, commentators and announcers. Anyone that directly or indirectly represents the sport of boxing will have a chance to showcase themselves to the boxing fans and whole industry. Also in attendance will be exhibitors, sponsors, television broadcasters and media.Box Fan Expo will also feature different activities such as autograph sessions, photo ops, weigh in, face off with your favorite fighters and buy merchandise.