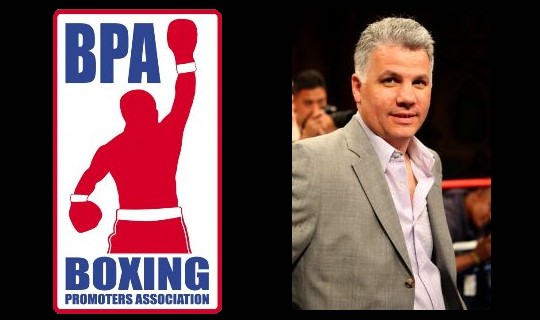 Las Vegas (AUGUST 4th, 2014) – The BOXING PROMOTERS ASSOCIATION have confirmed that they will collaborate with Box Fan Expo and offer a special package deal for the Boxing Promoters that want to have an exhibitor booth at the Las Vegas Convention Center for the inaugural Box Fan Expo that will take place this September from 10am to 6pm. The Boxing Expo will coincide with the rematch fight between Floyd Mayweather jr. vs Marcos Maidana.

Formed in 2009, the BOXING PROMOTERS ASSOCIATION consists of many of the largest and most well-known promoters in the United States, aiming to work together and tackle some of the most pressing concerns in the sport. The organization’s president is Joe DeGuardia, of Star Boxing, and for him, the goal of the BPA is a seemingly simple one on the surface. “The betterment of boxing”

A more thorough to do list for the BPA, according to DeGuardia, includes issues such as medical records and standards, health care and insurance, the impact of federal legislation on the sport and the ability of the sport as a whole to be heard by legislators, internal relations between promoters, the myriad sanctioning bodies which exist, judges and their competency, the amount, quality and tone of coverage that boxing receives in the media, and the sport’s credibility to spectators.

Quote from Joe DeGuardia, President of the Boxing Promoters Association :

“I look forward to the inaugural Box Fan Expo. The Expo is great for our fans and symbolizes some of our goals (Boxing Promoters Association). Boxing is evolving and this Expo exemplifies the progress of boxing and its re-emergence as a major world sport which has the capacity to solidify under the right circumstances.”

Box Fan Expo is committed to helping the Retired Boxers Foundation which is a non- profit organization that helps improve the quality of life for retired fighters. This is a fantastic opportunity for sponsors, retailers and anybody involved in the boxing industry to get involved and be a part of this once in a lifetime event and help out this great cause.. Box Fan Expo is proud to announce that part of the proceeds from the event will help the Retired Boxers Foundation.