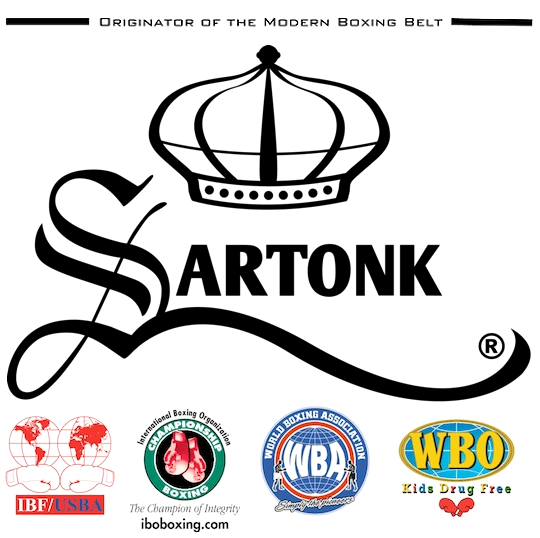 Las Vegas (JULY 30th, 2014) – SARTONK the premier belt maker of the WBA, IBF, WBO and IBO have confirmed that they will appear and have a Booth to Meet and Greet boxing fans at the inaugural Box Fan Expo this September at the Las Vegas Convention Center during the Mayweather vs Maidana rematch fight weekend.

SARTONK was founded in 2009, to safeguard a boxing legacy that dates back nearly four decades. In the late 1970s, Ardash Sahaghian was invited to apply his training as a jeweler to the modernization of championship boxing belts. The most visible of his works are the WBA, IBF, WBO, IBO, and Ring belt designs. During the tenure of his grandson, Edward S. Majian, SARTONK has preserved the classics and created contemporary designs, carrying the legacy into mainstream appreciation. Acting on the belief that champions deserve nothing less, SARTONK has elevated “the belt” to a work of art.

Featured in ESPN The Magazine in 2013, and, most recently, a recipient of a FedEx Small Business Grant award, SARTONK has gained international recognition not only for its expertise, but also, its company philosophy, which is based on integrity, community, and social contribution. SARTONK’s annual Ali-King Award encourages critical thinking and writing among boxing’s youth. While maintaining its high standards of design and craftsmanship, SARTONK uses its position in the boxing industry as a force for good.

Quote from President Edward S. Majian :
“ I strongly believe in the vision of the Box Fan Expo. Such an event is long overdue, and SARTONK is proud to be a part of the inaugural expo. This is all about community”