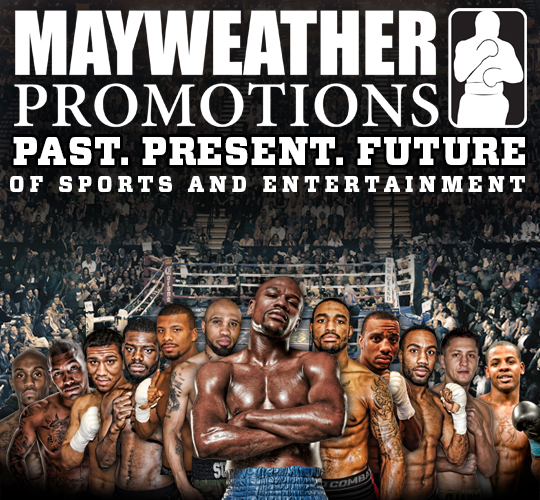 Meet and greet the world’s biggest fighters, promoters, and industry people at the first-ever, one-of-a-kind event

Las Vegas (Aug. 21, 2014) – Mayweather Promotions is pleased to announce that they will be participating in the inaugural Box Fan Expo on Saturday, Sept. 13 at the Las Vegas Convention Center.

Mayweather Promotions will have their own booth, with Mayweather Promotions and The Money Team merchandise, autograph signing opportunities with some of the top fighters under their banner, a DJ, photobooths, and lots of prizes to give away, including a pair of tickets to “MAYHEM: Mayweather vs. Maidana 2” that will take place that evening. Fans are encouraged to stop by at the Mayweather Promotions Booth, starting at 10 a.m. and partake in festivities throughout the entire day at the Box Fan Expo.

The Box Fan Expo will feature top industry members and former world champions such as Mike Tyson, Roy Jones Jr., Riddick Bowe, Zab Judah and many other famous fighters. Noted boxing commentator Al Bernstein will also be there and the Nevada Boxing Hall of Fame will have a presence as well. This inaugural event takes place on one of the biggest boxing weekends of the year, Mexican Independence Day, and coincides with the most preeminent fight of the year, “MAYHEM: Mayweather vs. Maidana 2”.
Box Fan Expo will take place at the Las Vegas Convention Center during the Mayweather vs Maidana 2 rematch fight weekend and will run from 10 a.m. to 6 p.m.

“This is going to be an action-packed weekend for Mayweather Promotions. We look forward to giving the fans a special experience Saturday at the Las Vegas Convention Center before Floyd and Marcos Maidana let their fists fly in the ring on Saturday night,” said Ellerbe.

Box Fan Expo is the ultimate fan experience that was created to promote the entire boxing industry and to allow fans to celebrate, meet and greet their favorite boxers and boxing celebrities. The event will feature boxing legends, today’s superstars, Hall of Famers, future prospects and the stars of today all under one roof.

Throughout the next several weeks, there will be weekly updates on many of the stars that have already committed to appearing at the Box Fan Expo.

For anyone in the industry who would like to be involved and to reserve a booth, please contact :

Box Fan Expo is committed to helping the Retired Boxers Foundation which is a non-profit organization that helps improve the quality of life for retired fighters. This is a fantastic opportunity for sponsors, retailers and anybody involved in the boxing industry to get involved and be a part of this once in a lifetime event and help out this great cause. Box Fan Expo is proud to announce that part of the proceeds from the event will help the Retired Boxers Foundation.