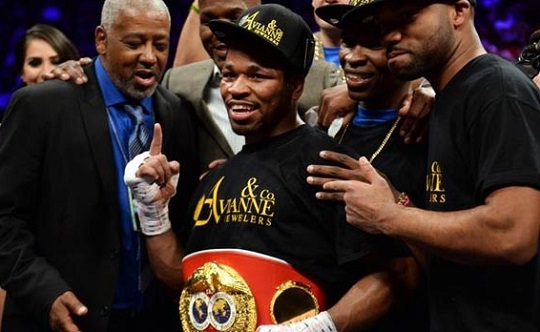 MEET AND GREET the world’s biggest fighters, promoters and industry people at
the first time, one of a kind event.

Las Vegas (JUNE 16th, 2014) – IBF welterweight champion Shawn “Showtime” Porter and top trainer Kenny Porter has confirmed that they will appear and have a Booth at the inaugural Box Fan Expo this September at the Las Vegas Convention Center.

Shawn Porter is one of the brightest rising stars and top welterweight boxers in the world. He is trained and managed by his father Kenny Porter. Shawn Porter won the IBF Welterweight Championship Title after defeating Devon Alexander. Porter then defended his title by knocking out one of the top stars in the welterweight division, Paulie Malignaggi in the fourth round. Hailing from Cleveland, a 2006 Stow High School graduate, and after sporting one of the most decorated amateur careers in US history, Shawn made a smooth transition to becoming a professional in 2008. He is currently undefeated with 24 wins and no losses.

Shawn Porter Quote:
“I’m looking forward to the Box Fan Expo. It’s going to be a great and exciting opportunity for me and my Dad to reach out to the public, and meet many boxing fans, from all over who have supported me. We’ll have the Team Porter booth for my fans to come ask questions, take photos and get autographed shirts and dvd’s. Its going to be an exciting time for the boxing community and I’m honored to be a part of it”