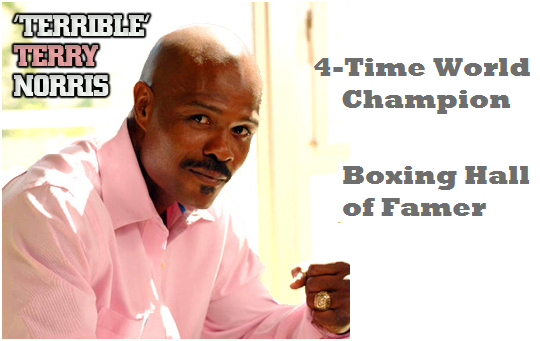 Las Vegas (AUGUST 7TH, 2014) –  4 TIME world champion “Terrible” Terry Norris has confirmed that he will appear and have a booth to Meet & Greet his fans at the Las Vegas Convention Center for the inaugural Box Fan Expo that will take place this September from 10am to 6pm. The Boxing Expo will coincide with the rematch fight between Floyd Mayweather jr. vs Marcos Maidana.

Terry will have merchandise to sell to his fans, as well as photos and memorabilia.

Terry Norris bypassed a baseball career for one in the Boxing ring, amassing a stellar 291-4 amateur record. “Terrible” Terry turned pro in 1986 and defeated Quincy Taylor before his TKO win against Steve Little for the NABF junior middleweight title. In 1989 he challenged the hard-punching Julian Jackson for the WBA title, but was halted in the second round.

The resilient Norris bounced back to score a sensational one-round kayo over John “The Beast” Mugabi for the WBC junior middleweight belt. An impressive string of 10 successful defenses followed, including wins over Donald Curry, Jorge Castro, Carl Daniels, Meldrick Taylor, Maurice Blocker, Troy Waters and Sugar Ray Leonard. In his11th title defense, he was upset by Simon Brown via 4th round TKO, but regained the title with a 12-round decision in the rematch six months later.

Terry Norris hung up his gloves in 1997 after a glorious and spectacular career, with a 47-9 (31 KOs) pro ledger. Terry Norris was inducted into the International Boxing Hall of Fame in Canastota in 2005.

“I’m excited about the Box Fan Expo. I’m Happy to be involved and see all the fans. I think it’s a good idea to keep Retired Boxers in the loop and keep their Brand alive. I never realize before how important it was to keep my Brand in the public eye, and the Boxing Expo will help me do that.”

Throughout the next several weeks, there will be weekly updates on the many stars that have already committed their appearance at the Box Fan Expo.